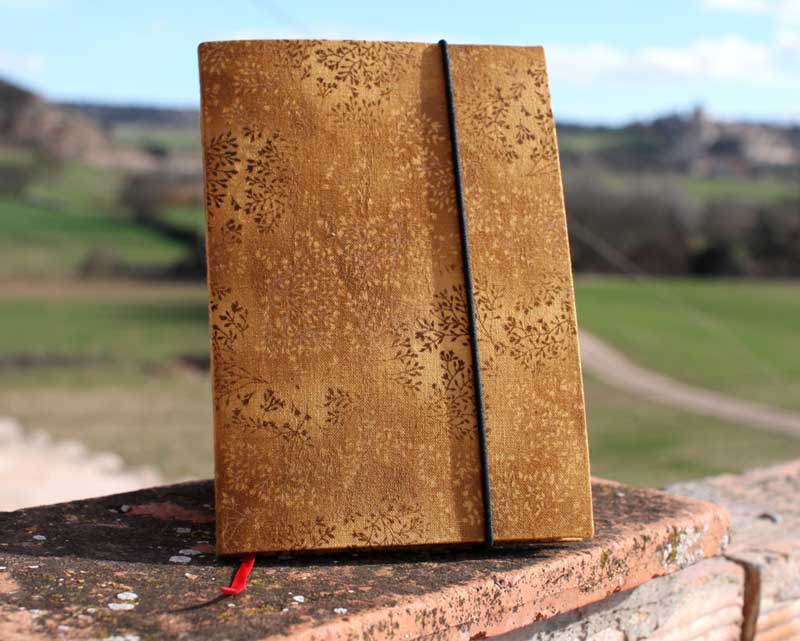 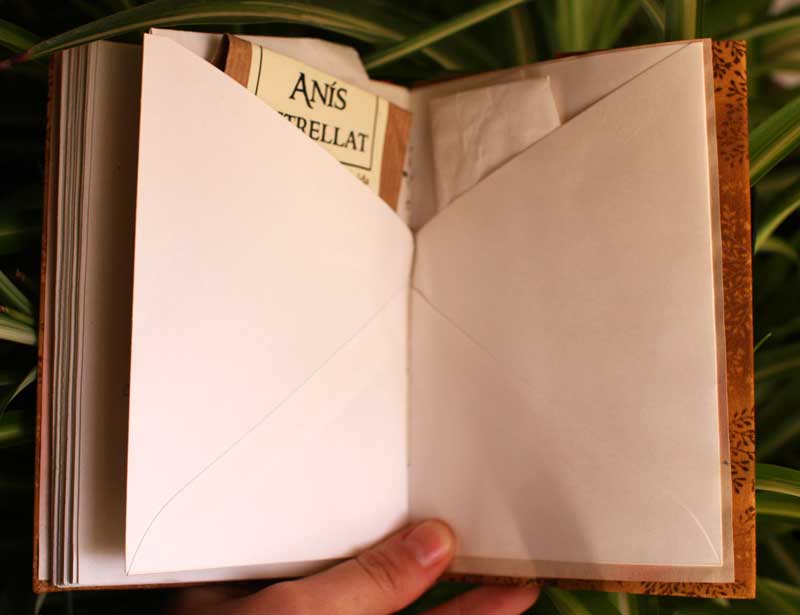 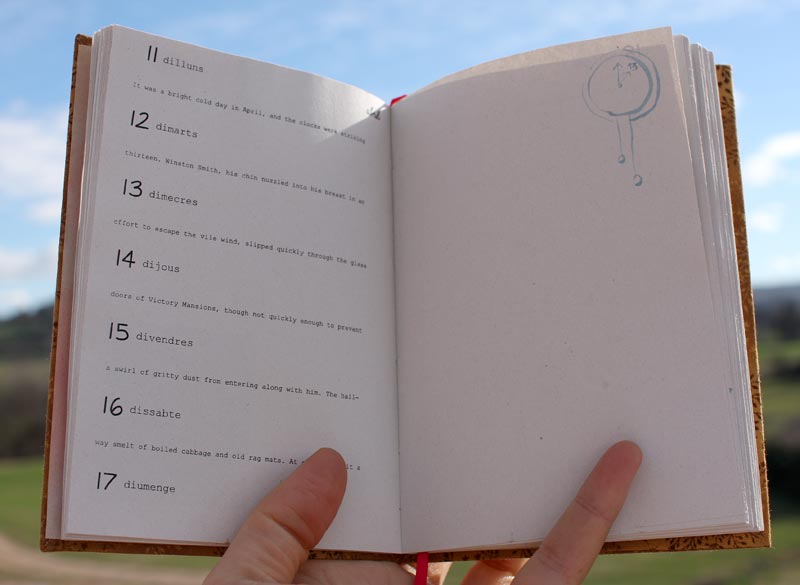 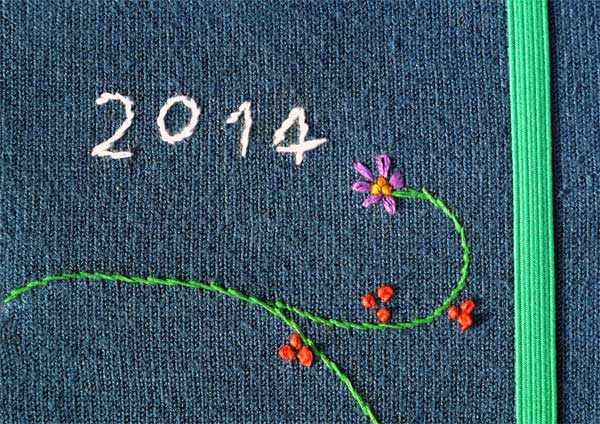 This year, between moving and travelling, we haven’t made any big edition of agendas like last year, and just a couple of monthly planners for those who were happier with the ones from 2013.

For a present, though, we made this unique agenda, in which each page has been individually hand painted and which also has an embroidered cover. 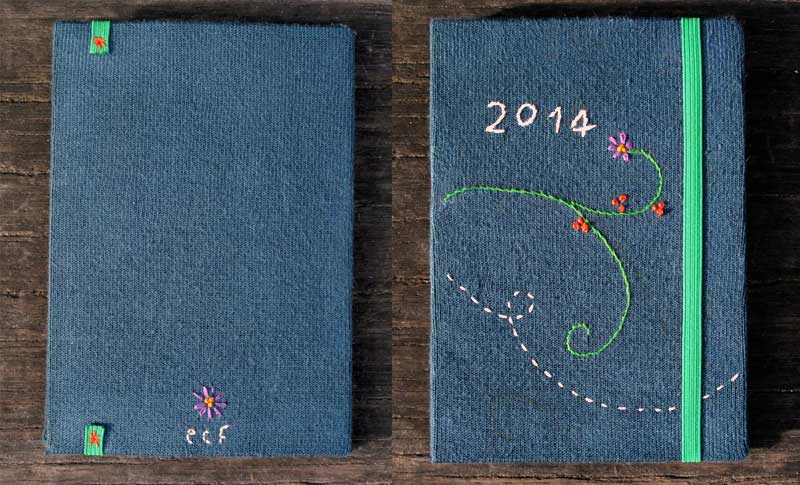 View of the cover and the back

We used recycled paper and photocopied it using an old machine, the cover is made with used cardstock, threads and a piece of a broken cardigan. When we put a few not so interesting things together, it’s amazing what kind of results we can get. Don’t you think? 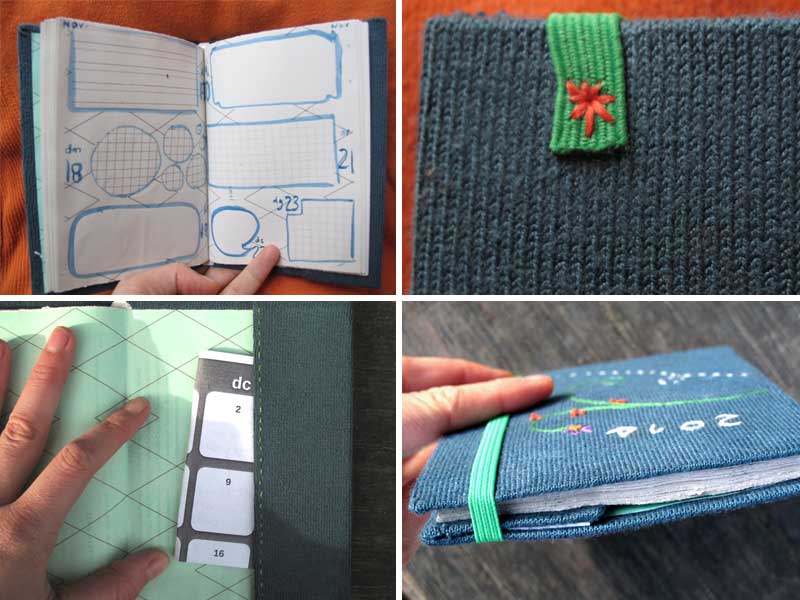 1. Sample inside page 2. Detail of the elastic attachment 3. Inside pocket 4. View from top

Yes, Edicions Cotton Flower is pretty much alive, just maybe hibernating after the agenda hangover. This is our last creation: a photo album (blank) with a 3-D fabric pinwheel on the cover! I’m especially happy with the colour combination. And see, I can go beyond blue and brown!

I sewed the cover with different fabric scraps, the pages are Canson 180 g/m2 cardstock (from the shop) and the album is held together with black linen thread using a binding called coptic, you can recognise it because the spine remains uncovered and the stitches form chains along it.

This kind of binding is very appropriate for albums and scrapbooks because they can be filled with pictures, papers, and such, without the book bulging too much like with most bindings. This is the first time we’ve try this bookbinding technique, and even though it is not perfect, we are quite happy with it and will attempt it again!

The pinwheel on the cover is a quilting block I adapted (the original didn’t have as many colors, but it had a much better finish!).

We’ve been a little busy during the year change season trying to get the more than 25 agendas we’d been commissioned to ready! Here’s to hoping they’ll help their now owners organize themselves :)

Above and below these lines there are images of the agenda that The Kruch designed and that he sells online in his Etsy store. It’s been good practice to bind for the first time a considerable series of books with content in them, of which we only had the experience of a single copy of a novel for its author. The fact that we print such small editions and we have to depend on printers over which we have no control whatsoever makes printing irregularities the norm, something we are not completely pleased about. But, what can you do! The results are nevertheless quite satisfactory and their recipients seem to be happy about them!

We also did a small edition of a 2013 version of the monthly view planner (we only have one page of the portuguese tiles’ calendar left!) and we designed our own weekly view planner, based on the earlier’s design, but in black and white for economy.

In all of the agendas most materials are new: the pages are white paper printed digitally in a copy shop… But the inside of the covers is made with cereal box card or something similar and, of course, the monthly planners’ covers are still made with an old calendar.

This journal is a commission that gave us a lot of creative freedom, and throughout the whole process of paper hunting across Barcelona’s paper bins, envisioning the design, stitching it onto fabric, and turning it all into a pretty little book it remains a clear example of the reasons why we decided to get into bookbinding.

i. stitching the cover ii. the book block is ready iii. preparing the book’s casing iv. we added a button

I made this one-month-per-page planner per request. I designed, printed and bound the booklet with a picture of portuguese tiles from an old calendar as a cover. It includes the months from october to september of 2012-13 and each month has a different color, each according to the season. It looks pretty good, but what I really hope is that it gets used and is practical!

If you are interested in having a similar (or different) planner made for yourself, please contact us

First Edition for The Kruch

The first edition of The Kruch‘s first two little “Cuentos de Ben” storybooks and also some blank notebooks with his drawings as covers are finally ready.

They can already be found in his online store!

I made this notebook for my “invisible friend” this year, using one of the book blocks we’d already readied in the summer. We are improving our hardcover technique!

Almost all the materials used for this one were bought: the bookcloth for the spine, the flowery cover fabric, the red headband, the endpapers, the greyboard and of course the tools, glue and thread. The pages were found in a print-shop’s dumpster though, and the bookmark was a present’s wrapping tape.

Between using found or bought materials, the main difference is that most materials we buy are beatiful and made on purpose for bookbinding, which makes the job a lot easier and the results look a lot fancier. For example, the grey bookcloth I used for the spine is reinforced, so it won’t wrinkle and it is a lot easier to work with it than with the regular flower fabric I used for the cover. I think if we bought a lot of nice supplies it would be very easy to make a lot of beautiful notebooks. But I find the input of chance and found materials is what makes each of our books unique!

I am pretty happy with the result, even though I should have put some greyboard inside the spine and in the end it felt a little flimsy. I hope it lasts a long time, though!